Official Game Ball --Wilson NCAA Vivido or Wilson Forte Fybrid ll NCAA Match Soccer Ball.  This is important to CIF and also to coaches.  You must file a ball report, even if you don’t want to.  The home team will lose its next opportunity to host a playoff game. 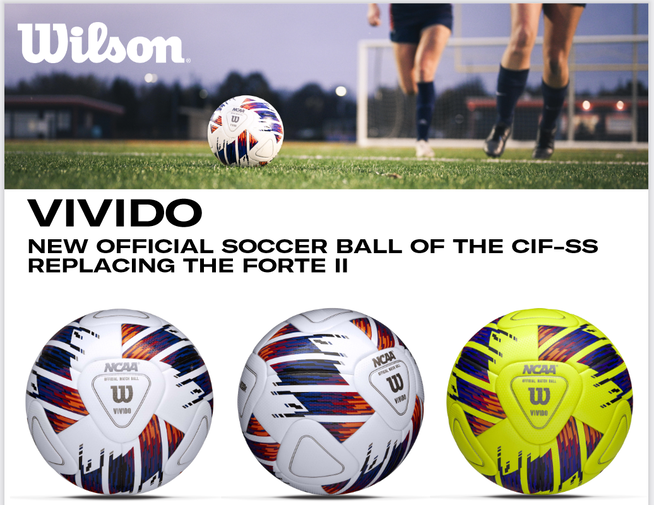 NOISEMAKERS PROHIBITED-- No noisemakers (horns, bells, victory bells, sirens, chimes, musical instruments other than those in the band, etc. will be permitted inside the gymnasium, stadium or playing fields at any CIF Southern Section contest (non-league, league, tournament, or playoff). Cheering devices such as wooden blocks, or other similar objects, are prohibited. Megaphones shall be used only by uniformed cheerleaders for the purpose of directing and controlling rooting sections. The improper use of any of the above listed devices by supporters of a team would subject that team to possible forfeiture of the contest. The use of music is allowed by the home team during pre-game, half-time and when the ball is “dead” as long as it does not interfere with the safety of the contest as determined by the game official.

Inclement weather:
Uniforms –- The away team will wear solid white.  The home team must wear dark jerseys and dark socks.  You must file a report if they do not.

Tie Breakers:
PLEASE NOTE: ONE COACH FROM EACH TEAM SHALL BE ALLOWED ON THE FIELD WITH THEIR
PLAYERS DURING KICKS FROM THE MARK.

All coaches, officials and team captains shall assemble at the halfway line to review the procedure as outlined below:

Protests:
Field markings:
Home School Supervision --- Faculty supervisors should be individuals who are as familiar as possible with the members of the student body in order to facilitate identification of students whenever necessary.

Visiting School Supervision -- The visiting school should assign a sufficient number of supervisors such that adequate crowd control can be accomplished.